This week’s current obsession is with reinventing furniture.

There’s a billion blogs dedicated to painting absolutely everything white and then distressing  it to make it appear as though you dug it out of a Beaujolais farmhouse. My current obsession is with painting everything white, but it’s the crisp whiteness of Scandinavian reinterpretation of mid-Century modern (MCM) furniture. 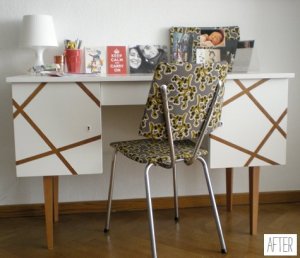 I ADORE  this reworking by Elien in Belgium of an old desk that was featured on Design*Sponge. She has given it a new lease on life, yet stayed true to it’s original design of simple, functional and aesthetically pleasing. J’adore! 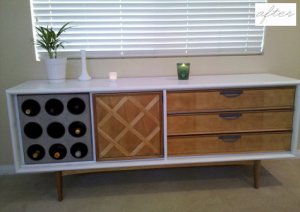 From tired and old, to hip and terriffic!

And this credenza went from being dull and boring, to being imbued with a sense of Scandi chic. Love the practicality in the revamp: the wine rack is a great idea.

I’m on the hunt for my own MCM masterpiece to reinterpret!