I have been thinking a lot about traditions, lately, and how to go about forming them in a place where I don’t have much of a history. As I get older, I am really starting to understand just how important traditions are important to feeling settled, involved and to feel a sense of belonging. So I’ve set about trying to create my own, and I aim to live the nostalgia whilst we create it.

Recently, I have been enjoying meeting my friend (the Canadian) for a drink and a meal after work on pay-day.  She’s great craic and seeing as she’s a new transplant to the Bay Area, it’s been great building a new friendship — someone I would be friends with no matter where in the world we met or in what situation.

Our first official pay-day outing took us on a culinary adventure through Rockridge from happy hour and half-price appetizers at Khana Peena Indian in North Oakland, to the Trattoria La Siciliana, an amazing Italian restaurant in the Elmwood neighbourhood in Berkeley. I look forward to heading back to the Trattoria La Siciliana again — I’ve been dreaming about the pesto penne ever since!

So on the menu for this payday adventure was soul food. Vegan soul food, to be specific.

Having never had anything deemed ‘soul food’ (Kraft Mac’n’Cheese apparently does not count) I was intrigued — and I was not disappointed. The Canadian knows a good restaurant! As a Vegetarian, I am accustomed to having a smaller selection from which to choose when I dine out.  But not at Souley Vegan: I could eat everything on the plate, and that was pretty exciting in itself. 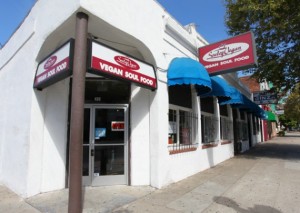 At the Canadian’s suggestion (she’d been there before), we shared the Soul Food plate ($19), and added the fried okra with beans and rice (extra $6).

The fried okra was also good, served with lemon and dressing, but a rather different to how I imagined in terms of texture and consistency. Still tasty, nevertheless.

A pay day feast for two

We washed the Southern fried food down with a bottle of Strawberry Ginger (‘Strawberry Ginger what?‘) ($4), which was great, provided your last sip is not the ginger part of the concoction… hot!

Overall, we were well stuffed with great food and great conversation. Highly recommended. I’ll be heading back in a heartbeat.

Afterward, we hit up The Trappist for a robust brew to cap off yet another marvellous pay-day adventure. It’s a pretty snazzy bar in a newly revitalised area of Oakland, yet they’ve managed to capture the old school ale house vibe. It’s certainly a little different from all the Wine and Oyster bars that have popped up around the place.

Next Adventure on pay-day: my choice, and city side of the Bay.
Do you have any favourite places to eat in San Francisco?