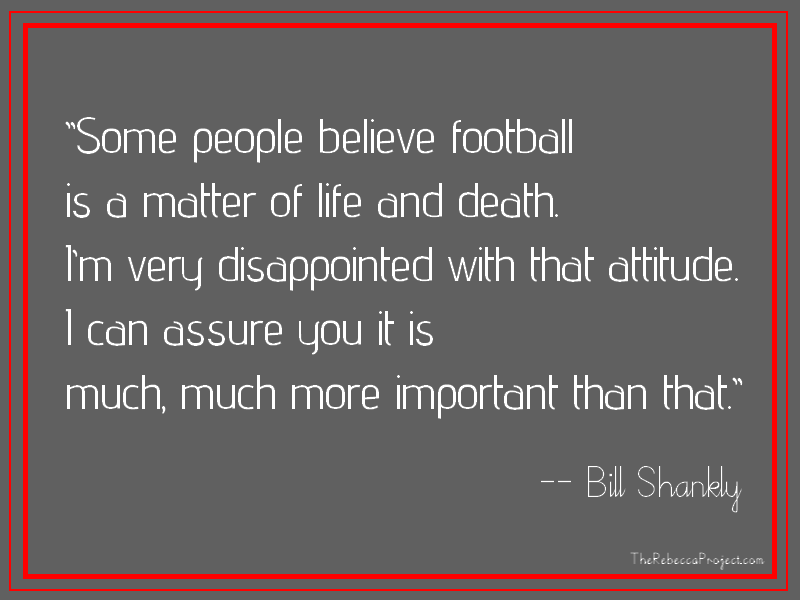 Footy is more than important.

It’s the morning of the Grand Final. In just a few hours, my beloved team, the Sydney Swans, will run out on to the hallowed turf of the MCG to do battle with the Hawthorn Hawks. And I am already incredibly nervous.

As I was preparing for work this morning, imagining what today might hold, my thoughts returned to one of my favourite poems of all time: Life-cycle by Bruce Dawe. There’s something noble and beautiful about the cycle of life built around football he expresses in this poem. Everything about it is perfect.

When children are born in Victoria
they are wrapped in club-colours, laid in beribboned cots,
having already begun a lifetime’s barracking.

Carn, they cry, Carn … feebly at first
while parents playfully tussle with them
for possession of a rusk: Ah, he’s a little Tiger! (And they are …)

Until, now, hearts shrapnelled with rapture,
they break surface and are forever lost,
their minds rippling out like streamers

In the pure flood of sound, they are scarfed with light, a voice
like the voice of God booms from the stands
Ooohh you bludger and the covenant is sealed.

Hot pies and potato-crisps they will eat,
they will forswear the Demons, cling to the Saints
and behold their team going up the ladder into Heaven,

And the tides of life will be the tides of the home-team’s fortunes
– the reckless proposal after the one-point win,
the wedding and honeymoon after the grand final …

They will not grow old as those from the more northern states grow old,
for them it will always be three-quarter time
with the scores level and the wind advantage in the final term,

That passion persisting, like a race-memory, through the welter of seasons,
enabling old-timers by boundary fences to dream of resurgent lions
and centaur-figures from the past to replenish continually the present,

So that mythology may be perpetually renewed
and Chicken Smallhorn return like the maize-god
in a thousand shapes, the dancers changing

But the dance forever the same – the elderly still
loyally crying Carn … Carn … (if feebly) unto the very end,
having seen in the six-foot recruit from Eaglehawk their hope of salvation.

I love sport, Aussie Rules in particular, and all that is associated with it. There’s a culture and a vernacular specific to Aussie Rules, intertwined with a religious fervour. And I love how a few people have managed to accurately capture elements of it: the poetry of Bruce Dawe, the writings of Martin Flanagan, and the music of Paul Kelly. The game means far more to us than just something to do on a Saturday afternoon.

After the heartbreaking one-point loss in the 2006 Grand Final, I hope the universe smiles upon the Swans once again. I’ll be following the action online from my living room in San Francisco kitted out in full red-and-white regalia. Kick off is about 9:30pm SF. Let’s hope I can eat something before then!