When I was studying a few months ago, I taped a list of things I wanted to post-uni to my wardrobe door. I added to it when inspiration struck and it gave me an extra push, knowing that I could achieve all of those marvellous things once I was finished. And one of these grand plans was hiking Pigeon Mountain on the south coast of New South Wales, three hours from Sydney. My sister and I hatched a plan for Easter and cleared our schedules. Now the time had come to finally tick it off my list.

We were up at dawn, the earliest I’d seen of the AM hours in a while. My sister – a morning person – drove. The first half of the journey was filled with sleepy-headed silence and nostalgia of all the trips that had come before it. The field beside the highway where giant sunflowers used to bloom now lays sadly idle.

We passed through a town that gave way into small rural allotments, then small farms. We saw cows crossing, lawns of lavender and the beehives that produce the Pigeon Mountain honey I love. The wide open paddocks were the shades of vibrant greens after the previous month’s record-breaking rains – a rare sight in a drought-prone nation. The sealed road gave way to a wide dirt surrounded by protected bushland. This marked the start of our off-roading journey.

“The first part is hardest. So we’ll power through and then take a rest when we get to next section of the hike,” she said as we pulled into the car park. We were in the southern section of the Morton National Park, 27km down a dirt road, and miles from civilisation. We were effectively in the middle of nowhere and it felt like it.

The rating on the trek from the National Park and Wildlife Service (NPWS) was ‘hard’ and suggested four hours each way for the journey of 5km.  There were to be no sherpas on this expedition so I was conscious of not overpacking. I settled for some food, four litres of water, a first aid kit, a camera and a light jumper.

It was a chilly 12 degrees Celsius (53F) and the sun had not yet reached us on the south-western face of the mountain. We each put in our ear buds, and set off with little ceremony or fanfare. 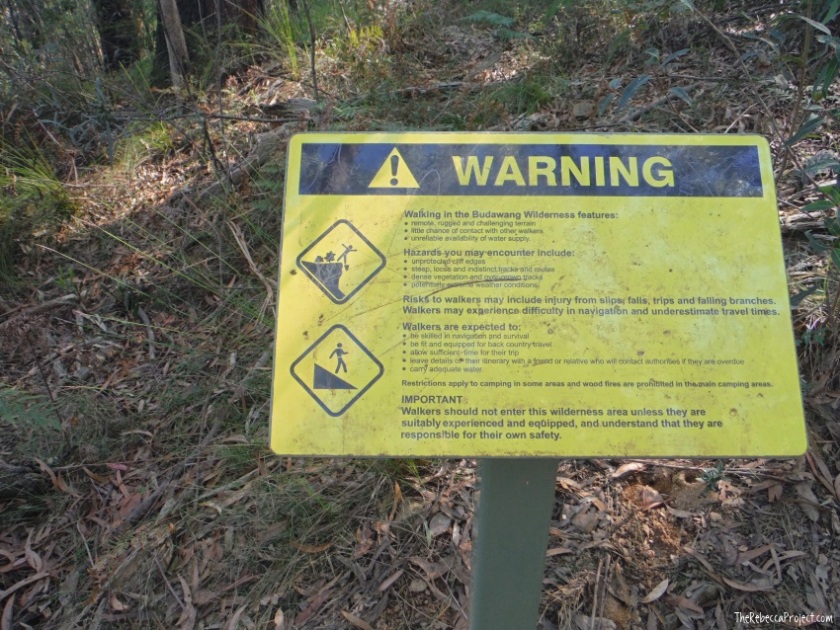 The first section of the trail was steep, the track was wide. The NPWS had formed uneven steps into the terrain to assist hikers and help prevent erosion. Trees stood at arms length from each other as though they were fearful of contact. But this soon changed as we climbed higher, giving way to more dense eucalypt and ash forest and small grey boulders to scramble around.

We climbed in silence, each listening to the music that motivated us. I listened to a mix I’d made to run along the Lakeshore Trail in Chicago, so I spent the first part of the climb reliving recent memories and trying to recall the sights and sounds of my regular run. The volume on my iPod was turned way down so I could (potentially) hear the slithering of snakes on the path and the clomp of oncoming groups. Being that I was in two places at once, this section passed pretty quickly.

We emerged at a slight clearing and stopped for some water. Just off the main track was a large boulder, and so we ventured out on to it to soak in the view. We caught sight of our destination – Pigeon House Mountain – rising up before us, but it looked so far away. We resumed our steady pace and in a few minutes came into what was definitively the second stage of the trail. It was mostly flat, scrubby bushland that ran the length of the natural ridge that led up to the next stage of the hike. In spring, this section of the track is wall-to-wall wildflowers, but in autumn, the only spot of colour came from a handful of orange grevilleas.

The scrub gives way to heath along the third section. As we climbed higher, the trees became taller and more dense, the track less sandy. This part of the trail was more of a muddy, temperate forest and it was here I was able to test out the waterproof quality of my new hiking boots.

This was my favourite part of the trail: still steep-ish and entertaining but with interesting views through the canopy. It was up here we heard the call of a lyrebird. I’d recently watched a documentary that showed the phenomenal ability of the lyrebird to imitate the call of other birds as well as human sounds (such as the click of a camera, a car alarm and a chainsaw), so it was special to be able to hear it in the wild.

At the base of the sandstone cliff face that made up the peak was a series of ladders. This was final stage of our ascent and we were making great time. An old man we passed on the trail spoke of his memories hiking Pigeon as a much younger man, when the only way to reach the peak was via a series of ropes. I’ll take ladders over ropes any day! 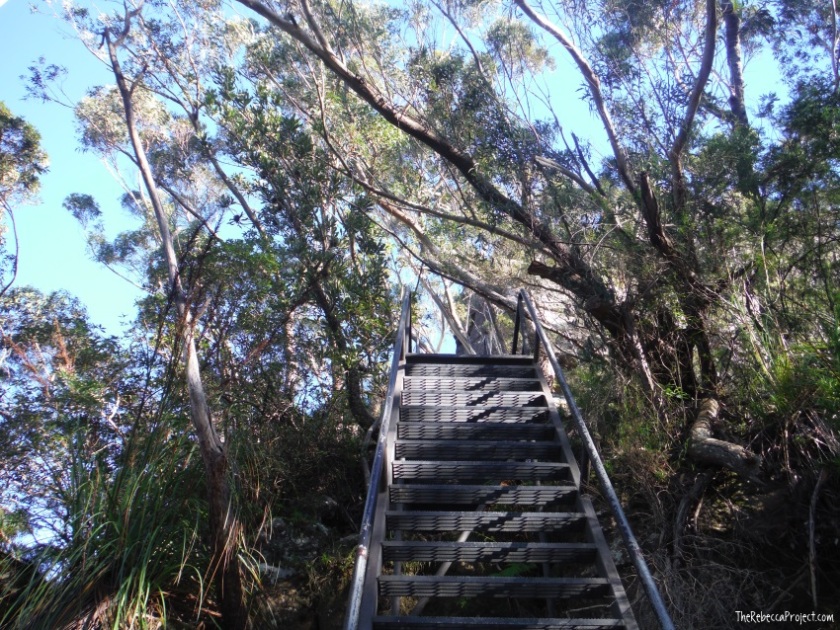 The ladders were ice-cold to the touch (which is always preferable to red-hot) and relatively easy to manage even though we both struck our shins on them multiple times. Two of the original steel ladders are still in use today. 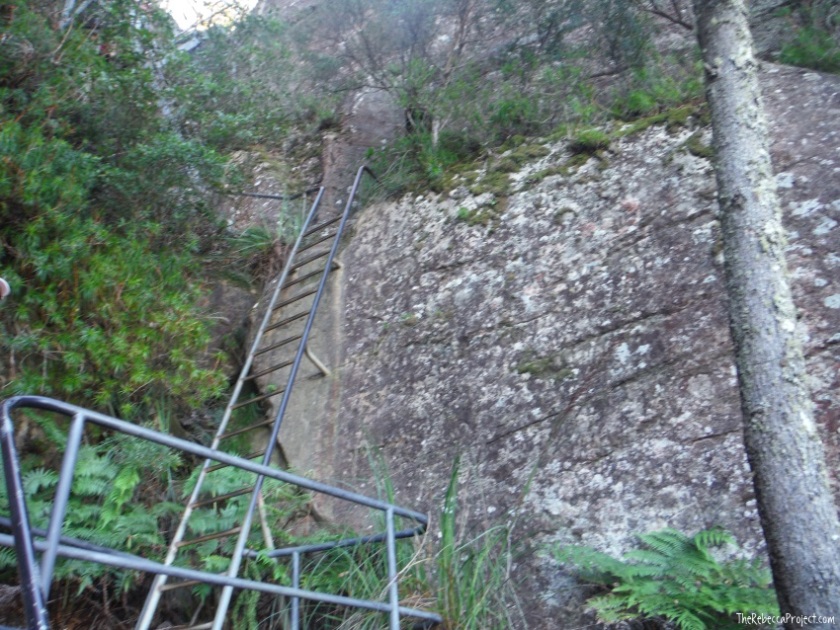 At the top of the ladders, we had to scramble over a few boulders to reach the summit. It was a relatively clear day and we could see as far south as Tuross and as far north as Jervis Bay. From above, the Budawang Valley looked similar to the Blue Mountains – with its wide valleys, long plateaus and colours. 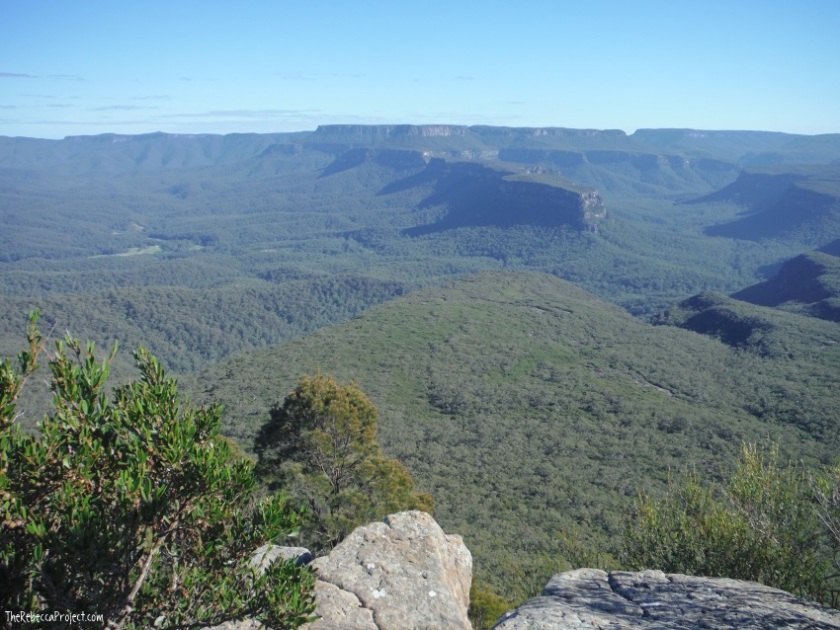 We had reached the summit, but I was not as enraptured as I thought I would be. Few things are as enjoyable in the moment as they are for me in memory. But I took five minutes to commit the views and my feelings about achieving this to memory, snapped a few photos and turned for home. 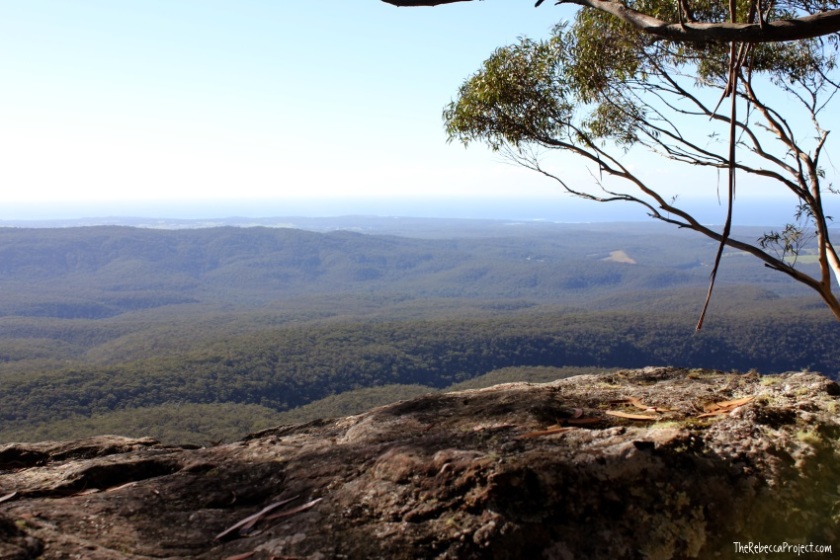 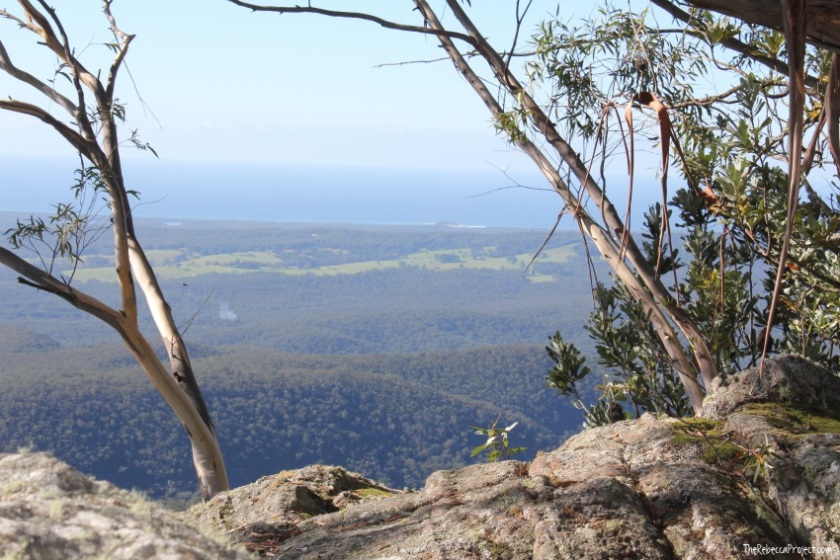 The return journey was fast, comparatively, and we passed plenty of groups on their way up: young couples, old folks, families with young children, and one ultra-marathoner. When we set out, the carpark had only three other cars and over 20 when we returned. We weren’t the only people with this idea over the Easter long weekend. 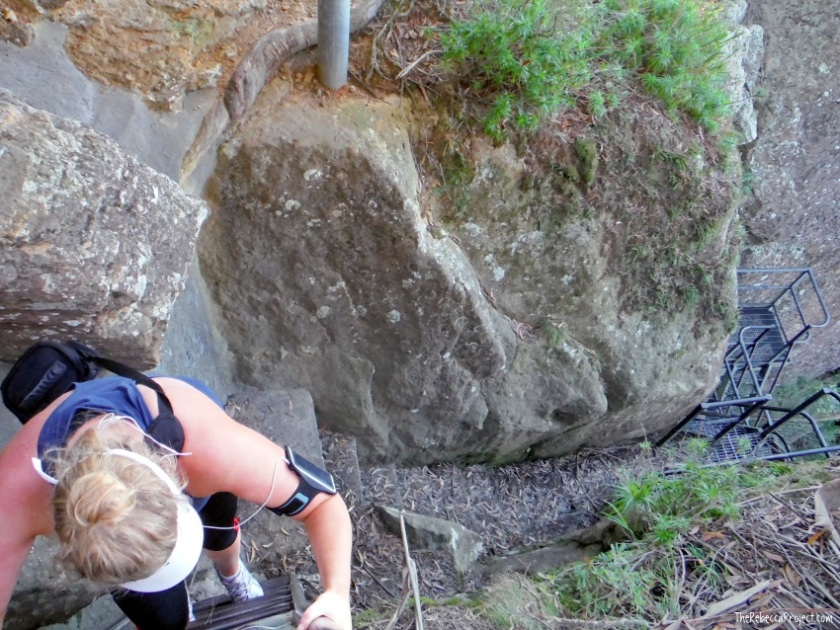 We made great time on the trail, too. Instead of the return journey taking us 8 hours, we managed to complete the trail in 2h16m (perhaps the NPWS were just erring on the side of caution?).

When you rely on cars or public transport every day, the simple act of using your own feet can bring a great sense of achievement. It’s a great reminder for me to use my abilities to achieve bigger things, more often.