The registrar asked if I had seen my x-rays, and I shook my head in the negative. Her face dropped and she said, “Ooooh!” rather ominously, then asked us to follow her into a consulting room. I looked at my sister with wide eyes, and whispered to her, “That’s not good. Not good.”

The next ten minutes were a blur of medical terms, hastily hatched questions, repeated answers and confusion. The registrar was of average height with short brown hair and had the air of a woman permanently tired. Her accent I guessed originated somewhere in the Russian world, and made my multiple breaks sound slightly more exotic. After a short wait, the kindly nurse (who was the doppelgänger of my friend Philippa in California) took me to spend what was left of the night in their waiting ward. It was just after 2am. I was given a shot of morphine in the belly, farewelled my sister and attempted to sleep with the bulky half-cast weighing down my arm.

A few hours later, I was transferred up to the Day Surgery ward where I spent the next two days observing all the comings and goings. Hospitals can be fascinating places, the site of some of the most painful and joyous occasions in life. And I saw this pain/joy dichotomy in the woman who occupied in the bed beside me for a couple of hours. Her sister and husband-in-law had driven her down to Sydney from the western districts of NSW and were waiting with her. Judging by the Professor and his gaggle of med students following him around like little ducklings, her surgery was a big deal.

She had an aggressive form of bowel cancer and the Professor was about to perform an incredibly complex surgery that was due to last ten hours. The ice-blue curtain was drawn all morning, but I could still hear her clear-headed questions, her voice unwavering. She was due to spend at least a week following the operation in intensive care, and her sister was instructed only to bring her children to visit if she didn’t have too many tubes and scary-looking machines. It was hoped that the marathon surgery would rid her of cancer and reconstruct her internal organs, hopefully providing her with a better quality of life than she had previously. And although I waited for my surgery with good humour and a patience unknown in my regular life (patience is not a virtue I possess!), it was still a stark reminder that I only had a broken wrist. It was small fry, comparatively, and I was grateful. 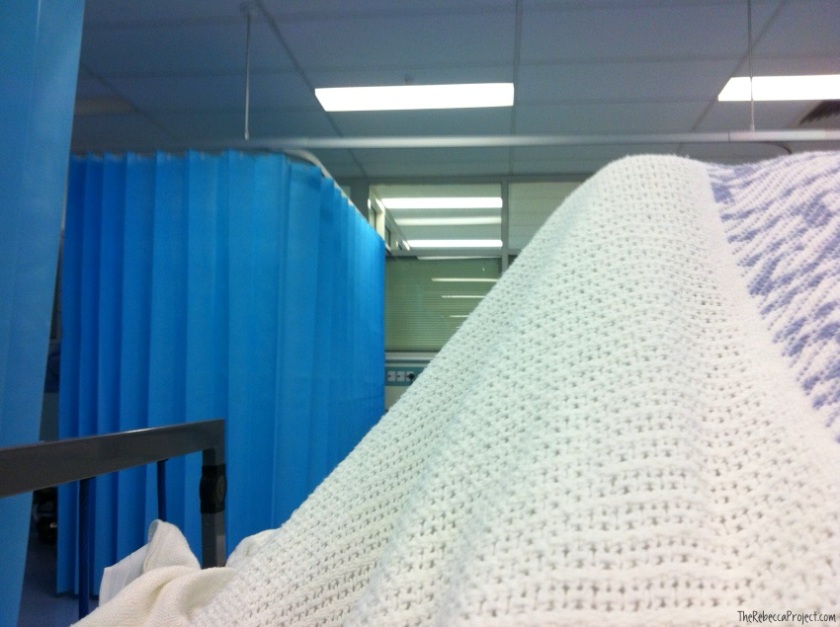 A few hours later, Mum brought a few creature comforts from home that made my day: the black-out sleeping eye mask enabled me to snooze at any time of the day or night, a scarf for warmth and a book to read. I was still in my basketball gear from the night before, so sliding out of the lycra and into trakkies was heavenly! My favourite sports bra was the only casualty. There was no way I could wriggle out of it, so I thanked it for its service, and was promptly cut out of it. Such is life.

It was after 6pm when the surgeon came to see me. Some of the other procedures had run long, so I had to wait another day. It really didn’t faze me — I was well looked after and tomorrow was only a few hours away. I was scheduled to be first into theatre tomorrow, but I was a little upset because it meant I would be unable to make it to the footy game that night. “Oh, you’re a fellow Roosters fan!” he exclaimed.
“Um, I meant the Swans, actually,” I said. Different football code.
“Oh,” he replied. “In that case, there’s an opening for surgery late next week…” he joked.

Overnight, the woman two beds over had severe sleep apnoea, and the young guy in the bed behind me tried to harm himself and was moved to a different part of the makeshift ward. Things escalated with him in the morning, and also with a middle-aged Chinese woman who reacted badly to the medication they gave her and went off the deep end, screaming in Mandarin and throwing things at the staff. When you’re in hospital for an extended period of time, you come to appreciated just how hard the nursing staff work and how tough the conditions can be.

Morning arrived. I spoke to the surgeon and his junior sidekick about the plan for surgery, then the anaesthetist (who just happened to be a dead ringer of my friend Ishara in SF). Sometime after 8am, she rolled me out of Day Surgery and down along the corridors, past all the flourescent lights all lined up in perfect rows. When you’re under the influence of morphine, time seems to lack the usual indicators. I chatted to the staff whilst we all waited in the antebellum for theatre, but it could have been a minute or half an hour.

Eventually, we rolled in to the crisp white suite, the space age lights hanging from the ceiling. It was as I pictured it: stark, clinical, but also a little newer than expected. Only the surgeon’s eyes were on display, but he was too far away for me to recognise him minus my glasses. I could only go by his voice. We agreed on what procedure I was having, and I felt comfortable that I would not be having my tonsils removed or my leg amputated in error. But there was no instruction to “count backwards from 100”, just the anaesthetist’s guide that I’d be experience a cold feeling, followed by a sensation of having consumed a few champagnes. From the cannula in my left hand I felt the liquid enter my blood stream and sprint up my left arm as I started to feel drunk, and then…

I awoke in the same bed back in the Day Surgery ward, more than a little groggy from the ‘champagne’. For the second afternoon in a row, my sister came to sit with me. She worked remotely on her laptop whilst I chilled in the bed and napped and recovered. We may not have done a whole lot of talking, and certainly not about anything of consequence, but I really appreciated the company. I know she’s got my back.

The surgery to insert the titanium plate and eight screws had gone well, as did the removal of the extra bone fragments that would have caused me grief. My right wrist felt a million times better than it had only a few hours previously, no longer like it was tied in a knot. Such a relief! I was to keep the half-cast dry and to see the specialist in two weeks to remove the stitches.

At the end of the day, I was finally discharged. Although I had to give away my ticket to the Swans Preliminary Final, my sister and I still made it back home with just over and hour to spare before the game started. I can barely remember it — and I think we each were only able to manage one slice of pizza each — but the Swans beat North Melbourne by 71 points. I’d like to think that I took one for the team by breaking my wrist, but then in the Grand Final a week later the Swans were humiliated by almost the same margin. So it was all a little hollow. But I still had perspective: my wrist had been repaired by the skillful surgeons at St George Hospital and was on the mend, so losing a Grand Final (especially in my morphine haze)  was small fry.