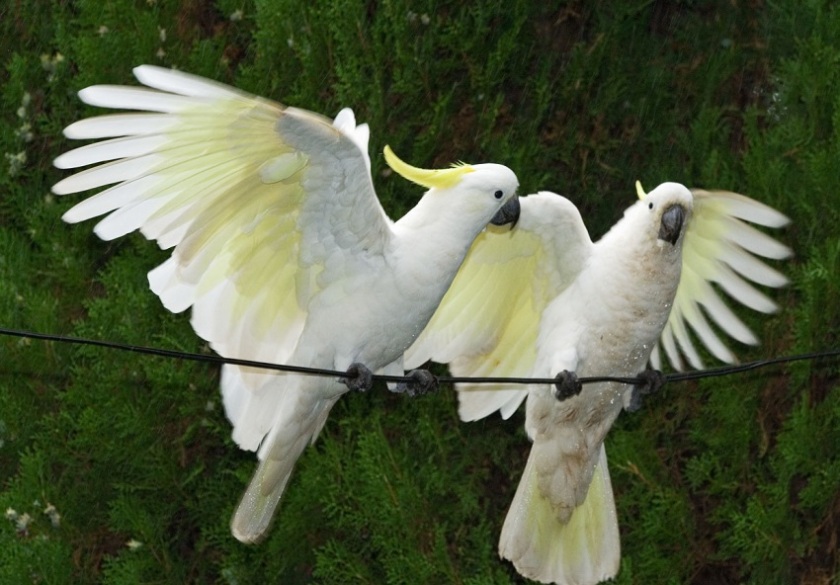 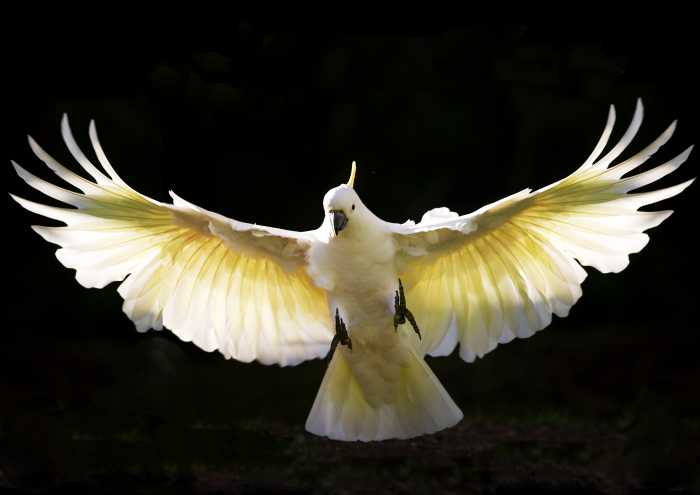 In the few minutes it took me to drop my grandmother home with her shopping, a majestic Sulfur-crested cockatoo was struck and killed by a passing car. I saw the members of the flock arriving, big white birds swooping in over the road ahead, a lifeless white body lying on the asphalt. They took up residence on the telegraph lines and in the trees near where their comrade was lying. Forty cockatoos swaying in the wind, grieving the loss of their mate.

These birds are not small and make an almighty sound as they swoop in and out of trees outside my bedroom window, large flashes of bright white and neon yellow. They’re monogamous, too: a couple will mate for life. I love knowing little things like that. It makes me marvel at the bonds animals can form, just as we humans do. And, usually, you can’t get the cockies to shut up. But the only sound I heard as I passed the birds that afternoon was that of the passing traffic.

It was poignant to see the deceased parrot’s family and friends coming together to mark his/her passing. It was a moment of reverence in the animal world. The scene was a beautiful snapshot of the cycle of life, of love, and the importance of being part of a community. Sadly, a day later, this sense of loss was echoed on a highway. The view from the backseat.

At Stanwell Tops, on a stretch of road just outside of Sydney and renown for its poor weather conditions, we hit some incredibly dense fog. We could barely see a metre ahead of the car. The electronic signs prepared us to merge right due to an accident ahead. We turned on the fog lamps, put our breakdown blinkers on for extra visibility and slowed to a crawl. A few hundred metres after the Bulli Pass turnoff , we encountered it. Multiple police cars, highway patrol, fire engines and ambulance and RTA were on the scene. A red car was wrapped around a tree, or a rock. I can’t really remember because little was left of the car, and there was a hospital gurney covered with a waterproof tarpaulin next to it.

Rain drizzled down the windows, and we stared at the scene as it unfolded before us. This was the aftermath of the tragic end of a human being. I inhaled sharply. This person had relatives, friends, coworkers. Maybe even a dog and a family of their own. They took their last breath there. There will be no more breaths, no birthdays, no nights out with their mates for them. And tonight, a family is grieving for someone they lost so tragically, so unexpectedly.

When I see scenes like that, my thoughts turn to the surviving family: I felt so sad for them. I imagined them grieving together, and trying to process the fact that their valued son/daughter/brother/sister/husband/wife/mate would not be walking through the door again. To sit and contemplate the events surrounding their loss, and to retell the funny stories of their quirks, impatience and great sense of humour in life. I want to hug those surviving and whisper in their ears, just like Amma does to her followers. I want to be able to help them, somehow, and to show them that I care that this person is not here to continue living.

Much like the cockatoos that came together to mourn the loss of their mate, the family and friends of the driver will gather in the coming days to acknowledge the life of the man/woman we saw unceremonially covered by the tarp on a wet, foggy road.